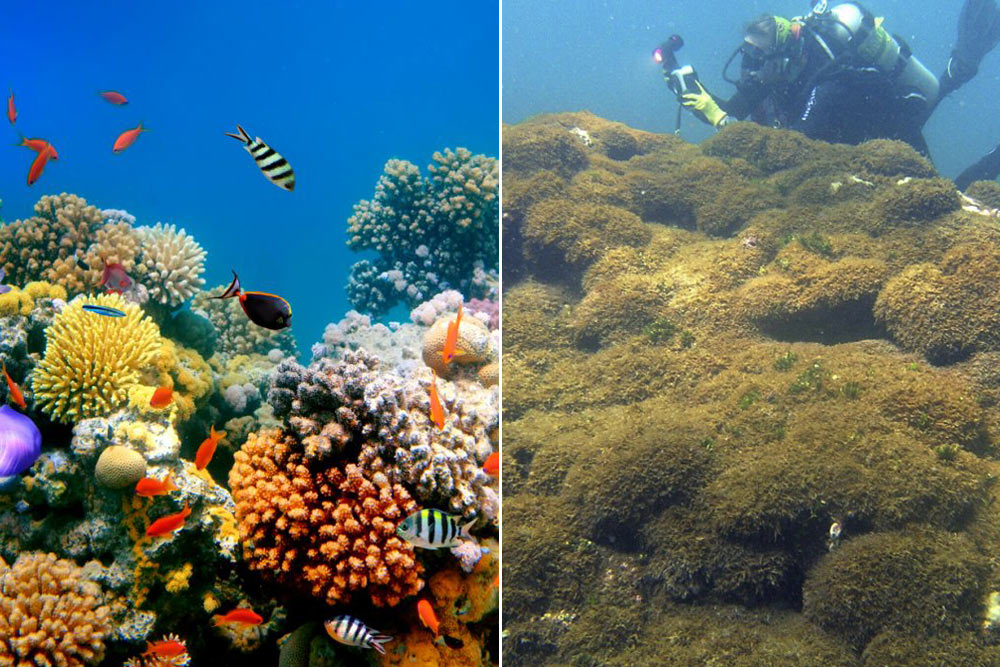 In the 21st century, it seems like the world’s coral reefs just can’t catch a break. Not only do they have to contend with the direct threat of declining biodiversity due to climate change and pollution, but they also face a threat on another front: being overrun by seaweed. But scientists have recently published compelling research that shows that unleashing armies of crabs on the coral reefs might be the solution to this woe.

It’s true that seaweed is naturally-occurring marine vegetation. But the overwhelming amounts of it deprive the corals of much-needed nutrients and make it hard for damaged or diminished corals to regenerate. And sadly, the seaweed’s prolific presence might be due to human activity. Read on to find out how crabs can potentially save the world’s coral reefs from being taken over by seaweed.

The Problem and the Promising Solution

Some of our agricultural activity causes runoff that’s rich in nitrogen and phosphorus. This runoff bleeds into the oceans and stimulates the proliferation of seaweed, which in turn can overwhelm coral reefs.

Coral reefs sustain natural and, unfortunately, human-driven damage which affects their health and the health of the diverse marine flora and fauna that lives on, in, and around them. And when they are overwhelmed by seaweed, they get starved of critical nutrients and space, making it hard for them to regenerate and keep living healthily.

As it turns out, when corals feel threatened by seaweed (and other harmful organisms) they release chemicals that act as a call to all sorts of fish. The call basically says “hey, come eat this tasty seaweed.”

So the corals do have a natural defense mechanism against seaweed invasion but it seems like there just aren’t enough seaweed-hungry creatures – even when we attempt to breed more. As one marine biologist explained, “Unfortunately, efforts to breed piscean grazers seldom keep up with rapid growth in these conditions.”

Thankfully, Professor Butler of Florida International University believes crabs might provide a solution. He and his team have observed that Caribbean King crabs (Maguimithrax spinosissimus) are huge fans of seaweed. Not just that, but they eat other kinds of invasive organisms that are poisonous or hard to digest for other species of fish, crustaceans, and aqua-vegetation.

So unleashing these crabs on the overwhelmed corals, his team’s research shows, is a super effective way of reducing the amount of seaweed that threatens the coral reefs. Not only do the crabs remove the seaweed, but they also promote coral regeneration. One problem still remains: because of juvenile predation, crab populations can be not big and robust enough to get the job done. Therefore Butler and his team are now focusing on boosting crab populations. Their research so far is promising and hopeful.

A Long Way to Go

Coral reefs are an integral part of marine biodiversity. A threat to them is a direct threat to the health of our oceans and the millions of species that live there. Butler’s team is doing great research and attacking one important problem. But sadly, there are many, many more – even just in terms of coral reefs and their ecosystems.

First, climate change means warming oceans, which in turn causes coral bleaching and can make it easier for underwater infectious diseases to spread.

Rising sea levels mean more sedimentation, which can smother corals. Changes in storm patterns can mean more volatile weather. This can cause structural damage to the reefs. Changing ocean currents can cause a lack of food and a decrease in the dispersal of larvae. And also importantly, changes in precipitation means more runoff of freshwater into the oceans, which leads to increased algal bloom. So there are still lots of challenges to the health of coral reefs.

That’s why the work of Professor Butler and his team is so critical. Hopefully, they keep showing amazing and promising results.