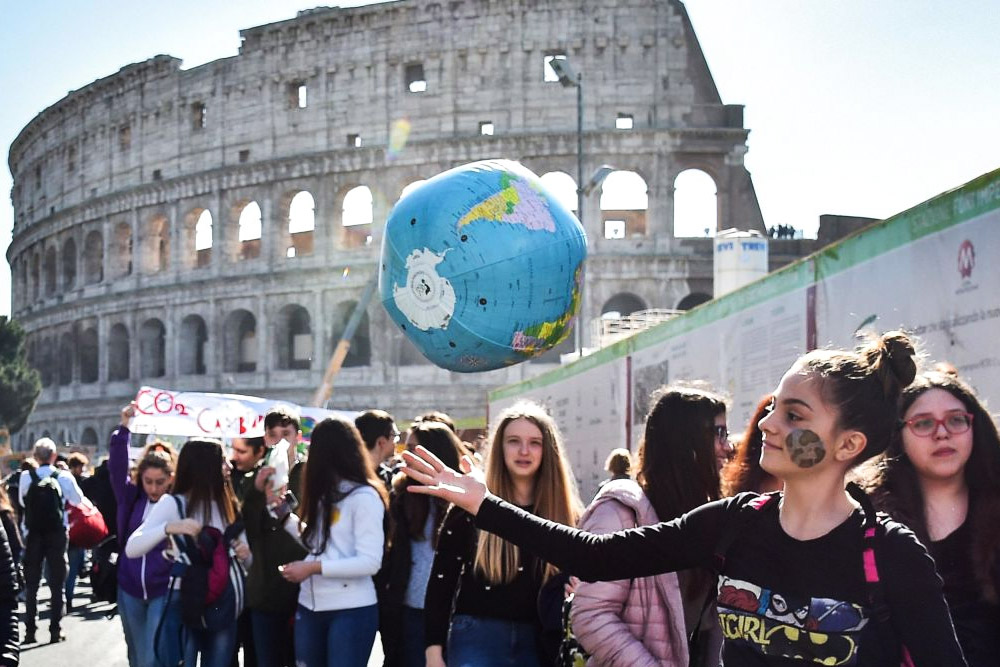 Climate change has been a concern for some time. Nations across the globe contribute to the phenomenon to varying degrees, depending on their industrial status and population count. But in the last couple of decades, awareness has been rising. Many countries and the communities within them have been trying hard to fight back and reduce their carbon footprint and CO2 emissions.

Italy, in particular, has been amazing. Their Ministry of Education recently made climate change education a compulsory part of the school curriculum for students ages 6 to 19. Nice! Shoutout to Italy for this initiative – hopefully more countries will follow.

In this article, For What It’s Earth takes you on a little trip to Europe (by imaginary rowboat, not via CO2 emitting airplane) to have a look at Italy’s new program to teach their youth about climate change.

Causes and Concerns of Climate Change

By now, it’s clear that the consensus on the scientific landscape is that human activities and industry contribute to the planet heating up. Hence the term “global warming”. Now, it’s important to remember that our beloved planet goes through natural cycles of warming and cooling. And scientists indeed took this into account when determining that we bear some responsibility.

Until about 11,500 years ago, before the discovery/invention of agriculture, humans had very little impact on their environment. For example, our caveman ancestors were not at all responsible for the last ice age, which ended around 11,700 years ago.

So according to the experts, what causes global warming? How do we bear some responsibility for climate change this time? Scientists determined that the three major factors of human-driven climate are greenhouse gases, land-use changes, and aerosols and soot. Let’s have a quick look at what these factors mean.

When we burn fossil fuels and emit carbon dioxide into the atmosphere, we release greenhouse gases. In turn, these gases create what’s called the “Greenhouse Effect”. This means that our emitted gases contribute to trapping warmth and radiation inside the atmosphere, which would otherwise be released into space. This has the effect of heating the Earth’s surface and atmosphere.

Another factor is the change in land-use. In order to sustain our large populations, we need to change the land surface. This, unfortunately, involves clearing out large swathes of forest and greenery in order to accommodate agriculture needs. The problem is that vegetation does a fantastic job of taking in CO2 and releasing oxygen.

The third reason has to do with more human (and also natural) pollutants. In addition to our fossil fuels contributing to the Greenhouse Effect, certain products we use sometimes reduce the effectiveness (or occurrence) of natural components that reflect sunlight. Snow, for example, is a natural reflectant.

Time for the Good News

Sometimes talking about climate change can seem a little depressing. This is justified because it has all sorts of potentially negative consequences. Such as rising sea levels, and bad impacts on animal habitats, for example. But there are real reasons for hope and optimism about the situation.

People around the globe have been taking climate change increasingly seriously. Recently, Italy’s education minister, Lorenzo Fioramonti, announced that the country will start incorporating climate change education as a mandatory part of the Italian school curriculum. Major props to Italians.

The program includes topics such as renewable energy, sustainability, and ocean pollution, to name a few. The curriculum is expected to accommodate one hour per week of environmental learning. Another beautiful aspect of this move is that the topics are spread across classic school topics, like geography, physics, and math. This naturalizes climate change education and makes it more appealing to everyone’s academic palate.

Minister Fioramonti’s environmental enthusiasm doesn’t stop at the schoolyard gates. He also pushes for green-friendly legislation at the highest levels of government. This guy is awesome.

It’s so encouraging to see people in important leadership positions take steps to fight back against climate change. Hopefully, more and more politicians and ordinary citizens will follow in Italy’s (reduced carbon) footsteps!