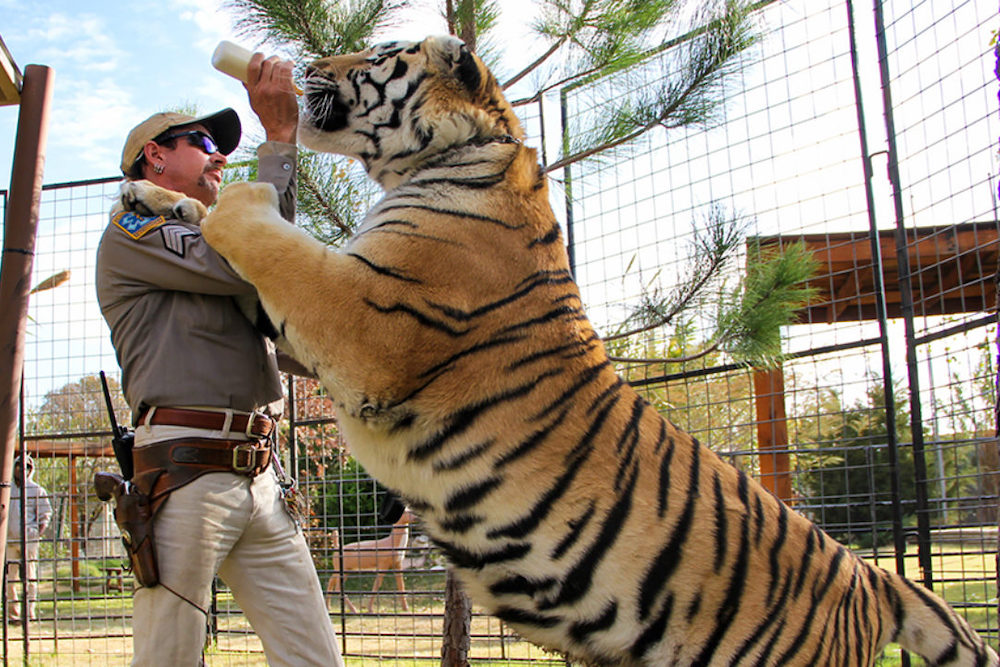 If you haven’t seen Tiger King on Netflix, well, let’s just put it this way: you are in for a wild ride. Spoiler alert! It’s about a few roadside zoo managers and the trials and tribulations of their trade. They are eccentric. But they are all extremely interesting. What you think might be a series focused on animals pretty quickly evolves into a tale of betrayal, cutthroat intrigue, polygamy, substance abuse, and cruelty.

Sounds dark, right? It is. In fact, what happens in the show is so twisted and shocking that it managed to catch the attention of the world. There has even been some backlash against Netflix for ‘glorifying animals cruelty.’ While the show does bring up important questions regarding the captivity of wild animals, namely, big cats, it certainly does not condone any cruelty towards them. In fact, it raises awareness and helps us see the right path forward.

A Little Bit About the Plot

Tiger King, a non-fiction documentary, is about a few different roadside zoos in the United States. These zoos are mainly home to big cats, mostly tigers. Throughout the show we see what goes on behind the scenes at these facilities while focusing on a few main characters.

The most prominent of these characters is the now-notorious Joe Exotic. He’s basically an assault rifle-toting redneck that has a bunch of piercings and he sports a mullet that’s dyed blond. He’s funny, he’s charismatic, but he’s a loose cannon. And he’s in an acrimonious feud with the manager of another zoo – Carole Baskin.

Though on the surface she seems calm, there is some compelling circumstantial evidence that Baskin may have killed her ex-husband. He passed away years ago but his body has never been found. The two zoo managers trade tit for tat and embark on various slander campaigns against one another throughout the show. Near the end, however, Joe calls in help from another shady character, and the series ultimately concludes with Joe going to jail for allegedly hiring a hitman to take out Carole.

We seriously simplified the events here, but the devil is in the details. Joe Exotic and the manager of a third zoo keep their employees in a cult-like status with little to no pay and subject them to terrible working conditions. Illegal deals are made and the list of shadowy doings goes on and on. But while all this drama is happening, you wonder “hey, what about the tigers?”

The Problem With the Big Cats

Tiger King shows us a lot of big cats held in captivity in these roadside private zoos. On one hand, you could maybe argue that the zoos are doing the animals a service by providing them with food and taking care of them. But if you look at these zoos and their keepers with a critical eye, sharpened by an awareness of animal mistreatment, the problems become clear.

For one, the big cats are kept in captivity in what more or less amounts to cages that are grossly too small for them. The average male tiger needs between 30 and 40 miles to roam around and hunt. Of course, in their zoo cages, there’s nothing even close to that space available. Aren’t these zoos doing their best though?

No, they’re not. If you compare these zoos with real animal sanctuaries, such as The Wild Animal Sanctuary in Colorado, you’ll notice that it’s entirely possible to host tigers in large-acreage habitats. In Tiger King, the zoos keep the cats in small confines simply because that is what is financially convenient.

Also, with all the conspiracies and shady human drama going on in the show, the cats take a back seat. It’s clear to viewers of the show, and it’s even mentioned by someone in one of the episodes, that the cats have been relegated to background status. The zookeepers and managers do the bare minimum and it’s clear that the real incentive for those ‘taking care’ of the cats is either monetary or social.

True, Netflix does focus on the people of the show. But the secondary-class status of the big cats that one understands from Netflix’s focus on humans actually does a fantastic job in bringing the mistreatment of the poor and beautiful cats to the forefront of our awareness. So whether or not this was Netflix’s attention doesn’t matter. This documentary sends us all an abrupt conservationist wake-up call. Do not support the improper captivity and the mistreatment of wild animals!