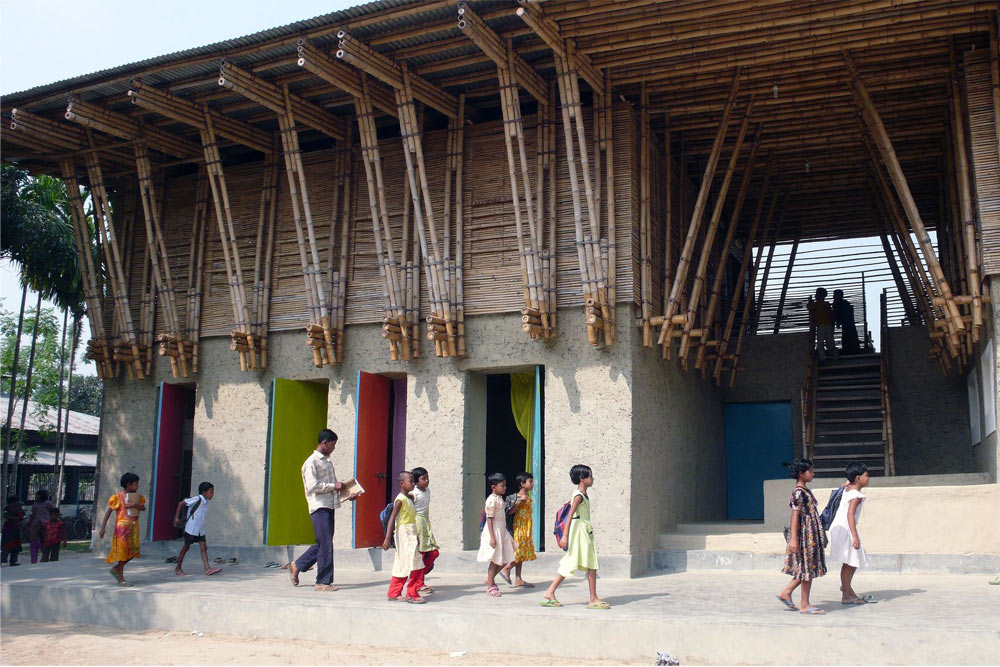 Bangladesh happens to be at the forefront of both sustainable living and progressive education. A school in the rural village of Rudrapur is an example of a sustainable building that’s sensitive to its natural environment. Called the METI Handmade School, it’s exactly as its name claims; a school built by the hands of the Dinajpur district locals.

It relied upon local craftsmen to assist in building it out of traditional materials. The village children aided them in its construction, making it a rare and inspiring example of a holistic approach to architecture. It’s been so successful, that it even received an Aga Khan Award for Architecture in 2007 for its ecologically friendly methods, aesthetic beauty, and harmonious cooperation between the people involved.

Where the Idea Came From

German architect and vocal advocate for sustainable architecture, Anna Heringer was responsible for bringing the idea to the table. In 1997 she volunteered her skills to marginalized communities in northern Bangladesh, returning only in 2004 once she had earned her architecture degree in Austria. She felt inspired to help the educational and skills development of the area.

Her thesis in sustainable building in Bangladesh earned her the position as lead architect in a project aimed at building new classrooms for a rural northern village. There wasn’t a local expert in a better position to take on the project, so Anna excitedly began raising funds. It was decreed that she would have to make use of local materials to construct it. By 2005, she had raised the necessary $35,000 they needed.

Alongside her colleague Eike Roswag, they developed a plan with local craftsmen for the structure. Local artisans created the bricks that would form the foundation to minimize moisture retention, while bamboo walls helped ventilate the classes and diffuse the light entering. The ground floor consisted of mud walls which teachers, students, and locals helped to form. Even the ceiling was a mix of natural materials like bamboo sticks, bamboo boards, and earth.

The walls of the school are 65cm thick, which helps cool the interior spaces. Construction happened only between September 2005 to December 2005, making it a short four months from the beginning until completion. In the end, they created three large classroom spaces that had ergonomic cave-like alcoves for kids to read, meditate, or play after class.

Enriching the Lives of the Children

The school opened it’s doors in 2008 and has since been recognized as one of the greenest schools on the planet. But it’s even more revolutionary in terms of its educational philosophy – the curriculum taught at the school emphasizes project-based learning. The open design of the building also means that there are many opportunities for outside distractions to enter the class, but teachers are encouraged to try and incorporate these moments into their lessons.

It’s a truly remarkable structure that can teach us a lot about building for the future. Rather than chasing the latest technology, it’s possible to create inspiring spaces through traditional methods. As the jury of The Aga Khan Award for Architecture said on the project: “The final result is a building that creates beautiful, meaningful and humane collective spaces for learning, so enriching the lives of the children it serves.”