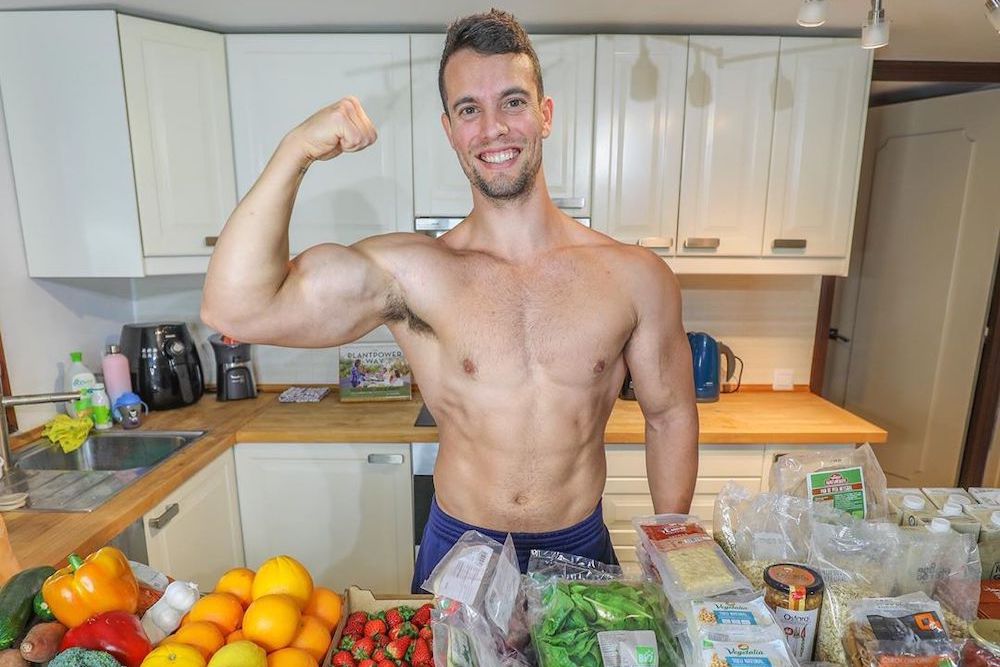 By now it’s a well-established fact that if you’re looking to put on major amounts a muscle, you’ll need to load up on protein and carbs as you power your way through a rigorous workout regiment. But there is also a misconception still swirling around: in order to get the necessary amounts and types of nutrition, you need to consume animal protein.

As it turns out, this just isn’t true. You can have a super healthy diet and if you’re looking to gain lots of muscle mass, you can get everything you need while still cutting out meat, dairy, and eggs. In this article, Jon Venus discusses the art of vegan bodybuilding. And as we continue to build awareness of climate change and of the problems associated with the meat, fish, dairy, and egg industries, his message could not have been more timely.

If you ever needed living proof that you can sculpt your body without eating animal products, look no farther than Jon Venus. A few years ago, after becoming increasingly aware of the environmental damage caused by industrial animal farming, he decided to go vegan.

He explains that people are wrong to think that they can’t get proper nutrition without eating eggs, milk, fish, and dairy and that cutting these foods out of your diet does not need to conflict with your fitness goals. You just have to make a little effort to inform yourself: “It is important to know that you have to eat according to your goals. Just like a meat-eater, you have to choose the foods that will help you achieve a certain goal.”

Protein-rich vegan foods are ubiquitous. Some popular ones include seitan, tofu, nuts of all sorts, lentils, beans, chickpeas, hempseed, peas, quinoa, soy milk, oats, wild rice, seeds, and much, much more. You can find all of these at any grocery store.

Venus added that in addition to cutting out animal products for environmental reasons, he also noticed a huge boost in performance and overall health. “When I changed to a 100 percent plant-based diet, I noticed countless improvements to my performance in the gym—much to my surprise.” The bottom line is that if he can do it, anyone can. Going vegan requires a little more attention to your diet, but it might be worth it!

Why Go Vegan In the First Place?

There is a rich body of literature discussing veganism, its benefits to individuals, and its potential benefits to our planet and to its other, non-human inhabitants. This article is, of course, is too short to go over all the information, but the reasons for going vegan can be roughly squeezed into three categories: environment, ethics, and health.

Raising animals for meat, cows in particular, results in the emission of a great deal of methane gas, which exacerbates global warming. And raising large animals takes up a lot of space and resources which could otherwise be used for growing more food for humans.

In terms of ethics, over the last few decades, activists and researchers have shown that the meat and dairy industries are not cruelty-free. Animals have feelings too, and unfortunately, their rights and well-being are repeatedly trampled.

Though aspiring vegans need to be extra mindful of what they consume in order to make sure they get proper nutrition, the health benefits of being vegan are substantial. Scientists have shown that eating too much meat can be hazardous. Veganism can help you lose weight, improve kidney function, prevent certain cancers, reduce the risk of heart disease, reduce arthritic pain, and more.